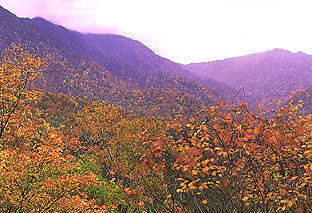 As of November 2011 there were 188 signatory nations, Japan joined them as the 125th conclusion country in 1992.
936 regions were registered as a world heritage, including the Grand Canyon National Park (U.S.A), the Galapagos archipelago (Ecuador), the Giza Pyramid (Egypt), and the Taj Mahal (India). Of these sites, 183 are natural heritage, 725 cultural heritage, and 28 are a combination of the two.

As of September 2009, Japan had registered 13 world heritage sites.
Japan's natural heritage :Shirakami Mountains, Yaku island, Shiretoko
Japan's cultural heritage:Himeji Castle, Buddhist structures in the Horyuji area, ancient city Kyoto's cultural assets, the community of wooden houses with steep rafter roofs (Gassho-zukuri) in the Shirakawago and Gokasan area, an monumental dome in Hiroshima destroyed by the atomic bomb and Itsukushima shrine in Miyajima, Monument of Ancient Nara, Shrines and Temples of Nikko,
Gusuku Sites and Related Properities of the Kingdom of Ryukyu, Secred Sites and Pilgrimage Routes in the kii Mountain Range, Iwami Ginzan Silver Mine and its cuitural Landscape.

The Shirakami Mountains is the general name given to an extensive mountainous region of 130,000 hectares ranging from the southwest of Aomori to the northwest of Akita prefecture. Within this area are 16,971 hectares of land, enclosing virgin forests of Japanese beech, which were registered as a world heritage region in December 1993.

Around three quarters of this land (12,627 hectares) lie in Aomori prefecture.

Geological features and topography of the Shirakami Mountains

The geological features of the Shirakami area comprise a foundation of granite created approximately 90 million years ago interpenetrated with sedimentary rock from about 20 million to 12 million years ago (rock created from magma that rose from deep within the earth). It is composed of rhyolite, quartz diorite, and other rocks.
A topographical feature is fabulous scenery and numerous precipitous waterfalls caused by the presence of deep interlocking valleys with steep slopes.

Topography
The rivers that flow through the Shirakami Mountains are the Ou, the Anmon, the Akashi, the Oirase, and the Sasauchi on the Aomori prefecture side, and the Kasuge on the Akita prefecture side. A ridge of mountains 1,000 meters to 1,200 meters high divides the flow of each of these rivers.

Features of the Shirakami Mountains

A special feature of the Shirakami Mountains is a virgin forest of Japanese beech almost unchanged by humans. This natural forest is one of the most extensive in the world.

Moreover, this natural forest contains a great variety of trees and plants, including communities of Japanese beech-oak and wing nut. Despite the high latitude, an extremely large variety of animals live here, including the TSUKINOWA bear, Japanese monkey, black woodpecker, and golden eagle. The entire Shirakami Mountains area is exhibited as a forest museum.

Especially, the world heritage area is one of the best-preserved virgin forests. This gives it a reputation as a site of great importance, even on a global level.

Major Fauna and Flora of the Shirakami Mountains

Aomori MANTEMA Around June, a pretty white flower blooms. It measures around 2 cm in diameter.

EZO HANA SHINBU A plant of the genus polemonium.
Often found on windy, grassy plains at altitudes of around 1,200 meters.
It produces a blue flouwer around July.

Tsugaru MISEBAYA Grows on crumbling slopes and in rocky areas. It produces a white flower around October.

Japanese monkey Several groups of Japanese monkey inhabit Shirakami Mountains, although the groups living in the Shimokita Peninsula and Tohoku area is listed in Red Data Book, published by the Environmental Agency, as the group of mammal which should be protected in the region.
TSUKINOWA bear It is the largest land mammal that inhabits the mainland of Japan, it stands 120-145cm high, and weighs 70-120kg. Although it is an omnivorous animal, it prefers eating vegetabie. It lives in a hole in a big tree or rock only when it hibernates.

Black woodpecker It is the largest type of woodpecker that inhabits Hokkaido and the northern part of the mainland. Similar in size to a crow, its body color is also black. The male's entire head and the rear part of the female's head is colored red. It has been designated as a national natural monument, and also it is listed in the Red Data Book as a species in a crucial moment.

Golden eagle A large eagle with a wingspan of more than two meters, it sports golden feathers on the back of its head. It lives in mountainous areas and builds nests on sheer cliffs. Numbers are fairly small, and it has been designated as both a national natural monument and a rare domestic species. And it is listed in the Red Data Book as a species nearly to the point of extinction.

Hodgson's hawk eagle It has a wingspan of about 1.6 meters. The feathers at the back of the head form a crown. It inhabits forests in mountainous areas. Numbers are fairly small, and it has been designated as a rare domestic species. And it is listed in the Red Data Book as a species nearly to the point of extinction.

Harlequin duck In the past, it was considered to be a migratory seagull that wintered in Japan, but it has been confirmed for the first time in Japan that it breeds in the Akashi River in the Shirakami Mountains. Its way of life is being studied. And it is listed in the Red Data Book as a species nearly to the point of extinction.

Although the advance of civilization has been accompanied by the gradual loss of nature from the earth, we are fortunate that a lush natural forest still remains in Japan.
Straddling the border between Aomori and Akita Prefectures lies the Shirakami-Sanchi, a vast natural beech forest with a unique ecosystem. In December 1993, UNESCO recognized its importance for the world by registering it as the first World Natural Heritage Site in Japan. This established the need for the Shirakami-Sanchi to be protected for all ages, not only by Japan, but by the entire world.
The rain that falls on the trees of the beech forest trickles down leaves and stems to be absorbed by the soil. It seeps into the rivers and so moves on to sea, nourishing a variety of plants and animals and bestowing rich blessings on its way. Then the water of the sea evaporates into clouds and returns to the forest, and the grand cycle of life resumes.
The Shirakami-Sanchi is one of Nature's greatest treasures, and it is the duty of mankind to safeguard it for future generations. Now, at the beginning of the twenty-first century, the people of Aomori and Akita Prefectures, their hearts united, show their determination to uphold this ideal by issuing this proclamation.